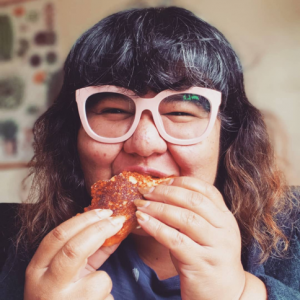 Virgie Tovar is an author, educator, podcaster and fat activist

What is your current position?

I work for myself, and nowadays I primarily identify as an author, educator and podcaster.

How did you get started in your career?

My career started in 2011 when I was in graduate school doing research on the intersections of body size, race and gender. I learned about fat activism and fat studies, and it really changed my life. At the time, there were very few people working in that area – and even fewer who took into account race/racism when it came to studying body image, weight-based discrimination, and the relationship to food. I decided to pitch the idea of an anthology of fat women’s writing to a trade (non-academic) press as I was finishing up my MA. By that point I knew I didn’t want to stay in academia because it was eating away at my sanity, my power and my dignity. I wanted to help women know there was a different life that was possible: one where we never dieted again. The book was acquired, and it became Hot & Heavy: Fierce Fat Girls on Life, Love and Fashion. Before the book came out, I started getting booked for lectures at some local universities. I think people were ready to have the conversation about how weight-obsessed our culture is. I think there was a lot of luck and a few very supportive members of the queer community involved in the start of my career. I think it helped that I had an academic background, which allowed me to know this subject very well from a cultural/sociological perspective, and that I was an irreverent activist who lived in a fat brown body, which allowed me to speak from first-hand experience. I’ve always been committed to bridging the value of a scholarly approach with people’s lived reality, synthesizing the theoretical and the tactical.

What advice would you give to someone new to the field?

The ED professional world needs critical approaches. It needs queer people, BIPOC, disabled people, fat people, working class people, trans and NB people. The ED space isn’t just clinicians. It’s podcasters, it’s educators who teach people how to create environments that don’t trigger people, it’s writers, it’s editors, it’s influencers, it’s parenting experts, it’s entrepreneurs. So, trust your gut, figure out how to incorporate ED into what you’re good at and what you love, expect pushback when you’re onto something powerful, be an early adopter, shake things up and follow the need not the rules. I remember being in grad school and my advisor saying that pursuing a career centered around fat people was “career suicide.” I’ve published three books and speak all over the country on this topic. Wow, was she wrong. There is so much room for innovation in the ED space! I think about the fact that the ED world is just beginning to understand that disordered eating is connected to weight stigma. This is so mind blowingly obvious, and yet it took decades to get here because the right people either weren’t in the room or they weren’t speaking their minds. The world of ED treatment has the potential to look totally different within a few decades. Be part of that shift. Listen to your intuition when you think about what’s working and what’s not, and instead of giving up or giving in, find the allies and the resources you need to make changes that help people.

You Have the Right to Remain Fat audiobook:

The Self-Love Revolution: Radical Body Positivity for Girls of Color

Do you want to be the first to find out about new jobs? Follow us on social media:

Advice From The Experts
HOME